Woke this morning early Angie got out of bed and let the dog into the bedroom where he promptly jumped on me. Now Gus has rules and limitations as he is in training to be the best dog in the world, anyway at the bottom of the stairs there is a gate which is closed when we go to bed and he stays downstairs at night. He had opened the gate and was lying outside the bedroom door. Angie heard this noise thought it was him and got up and he got in, well he didn’t get his usual morning welcome as he hadn’t been invited upstairs and he tried hiding under the bed, if I had let the dog stay up then tomorrow morning at 0400 he would have been scraping at the door so he got a slipper thrown at him under the bed and he went tail between the legs downstairs. Anyway tried going back to sleep and there was this scraping noise again, I got up a wee bit annoyed as I thought it was him at the door but it wasn’t he was downstairs so I went down and let him out to the toilet anyway then went back to bed, about 5 mins later the scratching started again but it must be an animal of some description stuck in the wall cavity maybe a moose, its quite large and maybe has its horns stuck.

Got up and it started snowing

so here are some photos from our wee excursion this morning 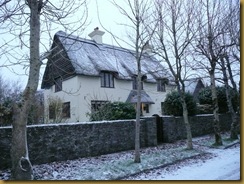 One of the neighbours houses, they have a really loud dog which barks as soon as it sees us going for a walk, I have tried different ways to quieten it to no avail. 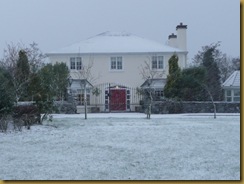 Our house with Gus’s playing field in front. 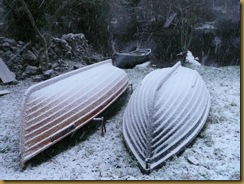 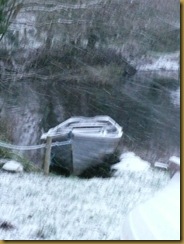 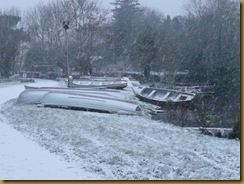 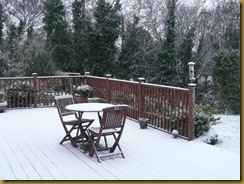 The back veranda. Looks good for a barbi.