Well I'm debateing selling the bike trailer, to the Sudaneese, every time I put the blinkin thing out as an advert, it has a bike on top of it and my tel numbers, it rains, and I know they could do with rain in the Nubian desert. Did you know there is a nose type called Nubian too, interesting ehh. One of the most visible parts of the human body is the human nose. It is the protruding part of the face that has nostrils. There are different kinds of noses that can be found. The shape of the nose is determined by the ethmoid bone and the nasal septum which mainly consist cartilage. 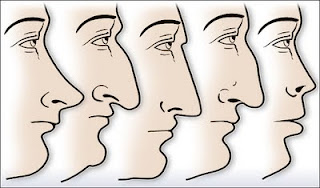 Mine is Squashed Greek Aquiline.
Theres an amazing amount of timber left to rot in our forestry and woods, I was asking around to see if there is anyway I could get some but they would rather see it rot than be taken for firewood. I'd have been quiet keen to pay to go in and fill my trailer, anyway I'll sneak in, oops no I shant I wouldnt do that. Jessy has to stay on the lead when we are out walking now as she has been getting wind of something she wants to eat or chase and has been running off, not sure if its baby bunnies or what but shes desperate and wont listen to me calling her back. ﻿
Charity the bear has been missing in action the last few months but I think she is back in the post, hope so anyway.
Posted by Rob Shairp at 10:46 PM