Well my visitors left this morning so the house is quiet now. I had Lorne his girlfriend Vicky and their wee boy, Sheana, Sacha and John staying for the last week. There is a wee break now until my first "helper" arrives on the 5th of November, he is a 24 yr old engineering student from Barcelona. The weather was pretty grim for the visitors this week with only one or two dry days and plenty of the wet stuff.
We got quite a bit done over the week with a roof erected as a lean too at the shed for storing chopped wood under and two trailer loads of wood stacked. John planted bushes and plants for me and devided some plants that were getting too overcrowded in the beds.

Posted by Rob Shairp at 1:31 AM No comments:

Huricaine Gonzalo on its way.

John (my brother in Law) has been up visiting since Wednesday and we have been busy transplanting bushes and thinning out plants round the house. The wall at the front now has flowering currant, Euonymus, Pointintilla and Gravillia and we build a couple of raised beds which now have Agapanthus Daisy and Pink Ladies that we thinned out. It will be interesting to see if they survive the remnants of Huricaine Gonzalo which is currently making its way across the Atlantic tracking slightly North of us towards my Mum and Dads house. Its the first storm of the winter and they are forecasting snow on the Scottish mountains.

I got a call to ask if it was ok if Lorne his Mrs, Vicky,  and wee boy Joey came with Sheana and Sacha on Monday so I shall have a house full, eight staying from Monday night. If its not too windy we might try and put the roof on my wood drying area, many hands make lighter work. I have one wall left to paint in the office today and its a good day for it being wet and windy out.

Posted by Rob Shairp at 5:53 PM No comments:

I had a friend round this week to give me some advice on the garden, she is doing horticulture at college, anyway she took a load of vegies she had grown with her which were really nice and she told me about WWOOFers which is an organization that puts organic farms in contact with people who will give labour in exchange for learning the trade, you pay nothing for their work but provide accommodation and food. A bit like the Kibbutz that used to attract backpackers when I was a kid.  The Kibbutz was a collective community in Israel that was traditionally based on agriculture. The first kibbutz, established in 1909, was Degania.

Anyway I'm not an organic farmer so this sort of ruled out the WWoofers but I found a site called HELPX which does along the same lines offering food and accommodation to travelers in return for their labour. I could really do with a hand clearing and maintaining this big garden so am going to give it a try and see if it is worth it. After putting the ad on the website I got 5 emails straight away 2 blokes from the Czeck Republic who are at college in Brno but want to visit Ireland for 3 months to learn English and suss out job prospects here, they sound quite good as they have experience in building walls and so forth. The was an email from a 19 yr old French bloke, a girl from Canada and one from Barcelona who loves dogs and could be a great house sitter if we went away in the New Year, save putting the dogs to the kennel. I shall maybe give it a try after John Sheana and Sacha leave at the start of November.

Looking forward to some company.

I put a dado rail up round the living room last week and painted the lower section of the wall a deep red colour it looks good, the old office needs a paint now so I can use it as a third bedroom. I have a section still to do behind a big book case the first wet day that comes along.
Posted by Rob Shairp at 10:59 PM No comments:

1st gale of the season and a call from Ozz

Well we had the first gale of the season last night, it wasn't strong enough to uproot trees or anything but it did break my prize sunflower in half much to my disappointment, the sunflower was 6 ft tall and had 12 flower heads on it the biggest was the size of a plate. All the Rowan trees lost their leaves and the outdoor table got blown over, the homemade furniture didn't budge but it weighs half a ton so that did not surprise me.
Had a day off from lumber jacking today as my neck and shoulders were sore, all that chopping with the axe probably, anyway the heat pack is helping so it's just muscular.
My friend Mark from Australia gave me a call and we chatted for a good half hour, real friends are the ones you might not talk to for long enough but when you do it's the same as if you were never apart, Paddy is the same when we get to talk.
There was a bit of rain overnight but the drains are still dry, the ground just soaked it all up.
Posted by Rob Shairp at 2:41 AM No comments:

On the set of Klondike

I had to pop across to Oughterard to pick up a laptop needing repairs this afternoon and killed three birds with the one stone, dogs got a swim in Loch Corrib, did my shopping at Londis in Oughterard and visited my pal Keith. Keith has a farm and mines near Oughterard and they are currently filming a mini series called Klondike. The series is set against the backdrop of the Alaskan Gold Rush of the 1890’s and tells the story of the Connollys; three emigrant Irish brothers from Rosmuc, Galway, who make their way to the Klondike Valley in the hope of striking it rich.

They were filming down near a  wee river on his property when I was there but I took shots of the town they have fabricated for the movie as well as a couple of the actors. 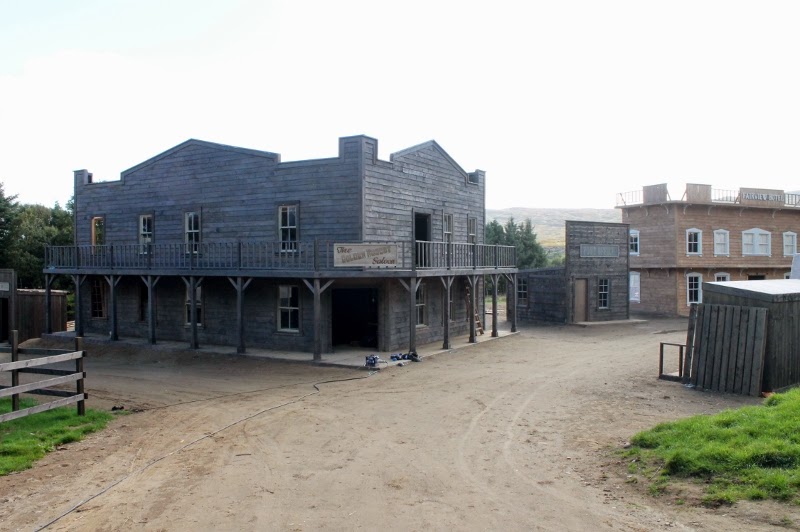 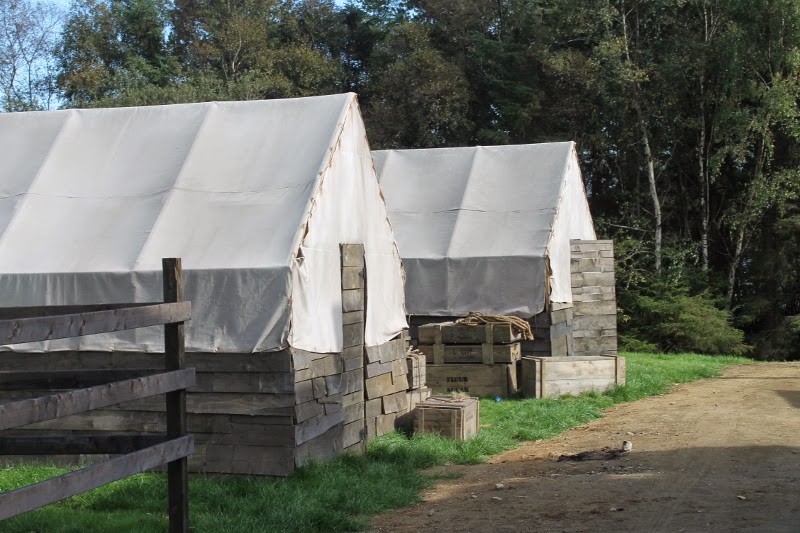 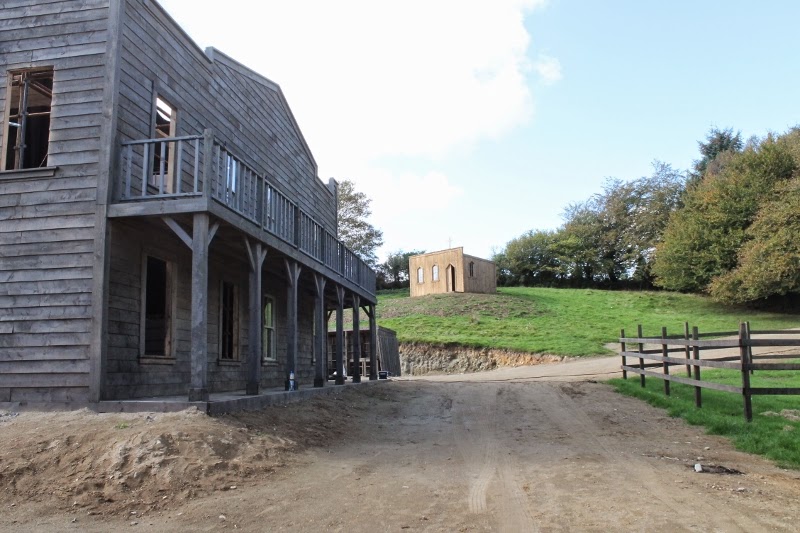 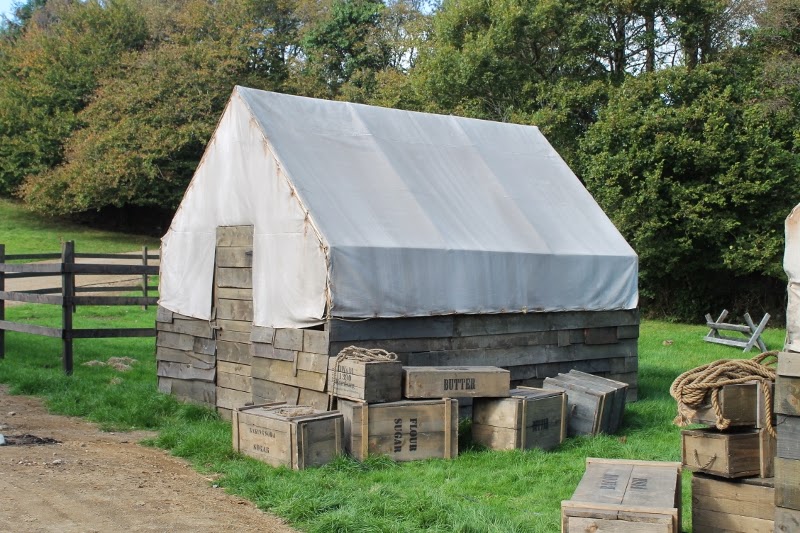 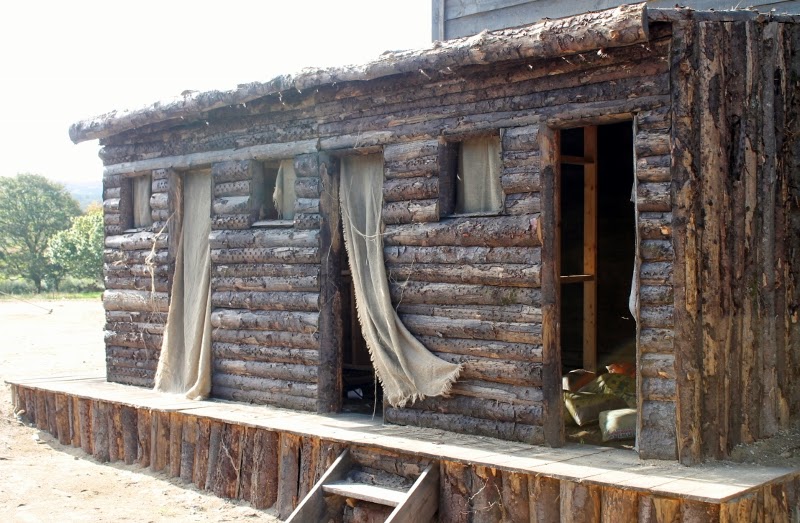 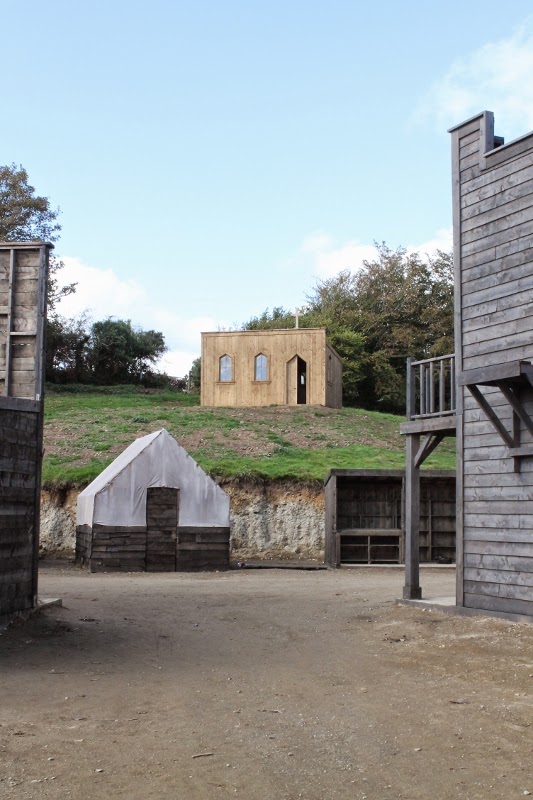 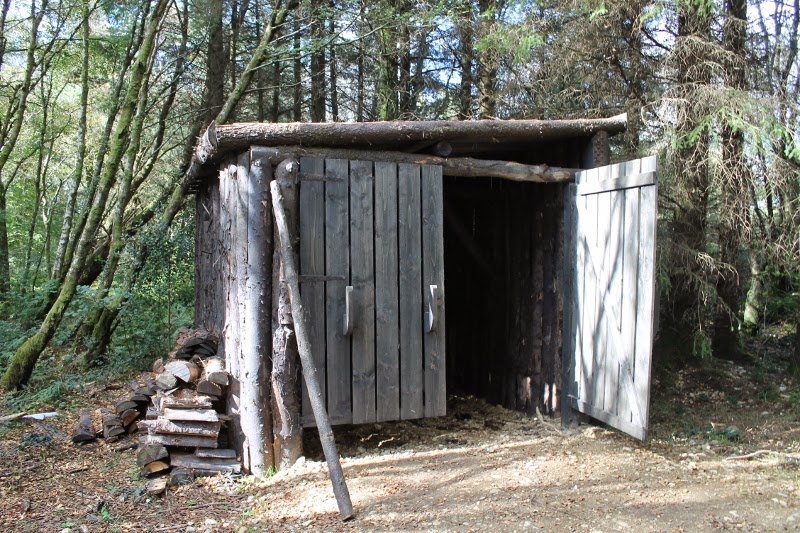 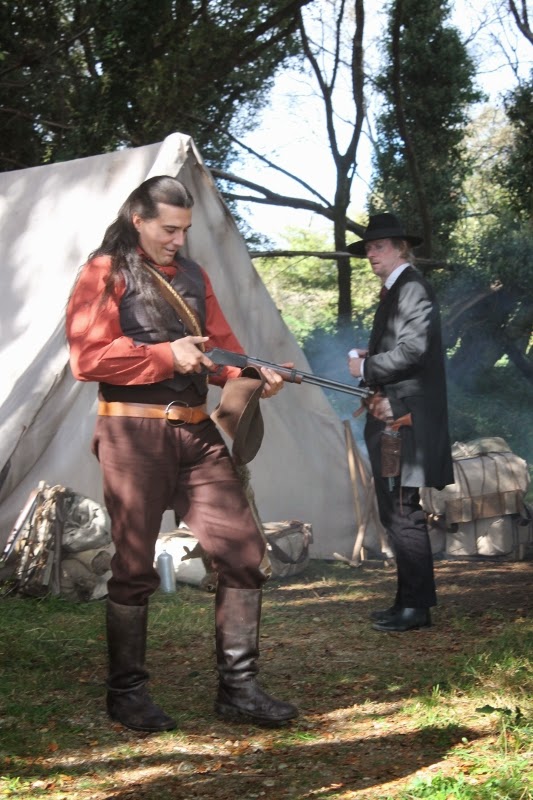 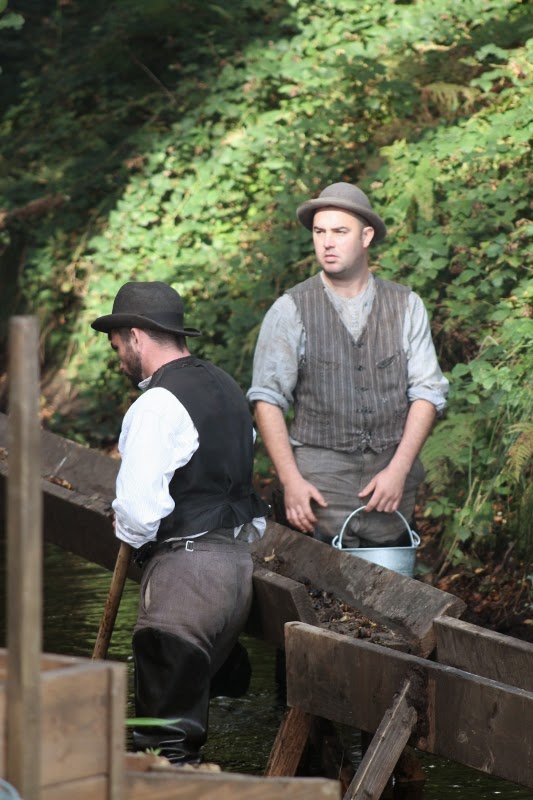 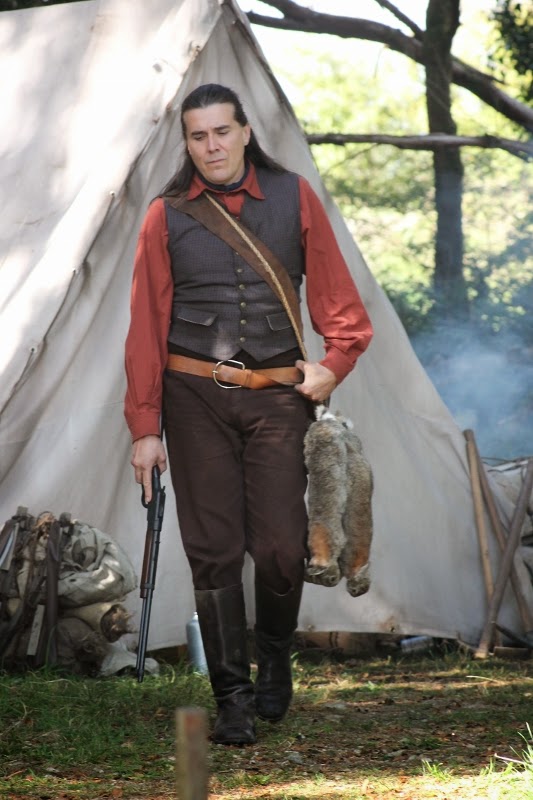 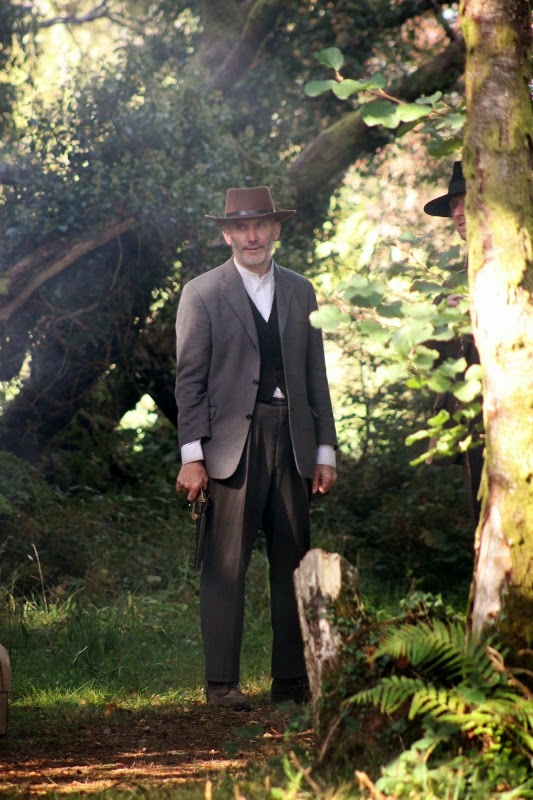 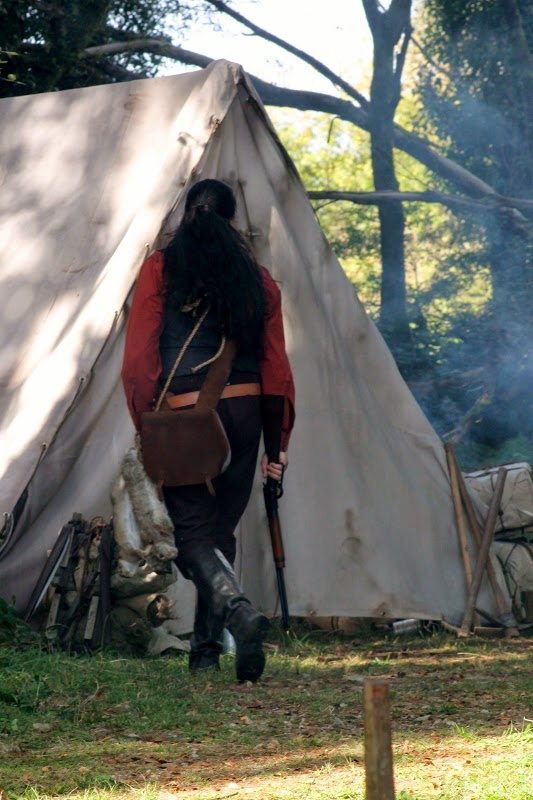 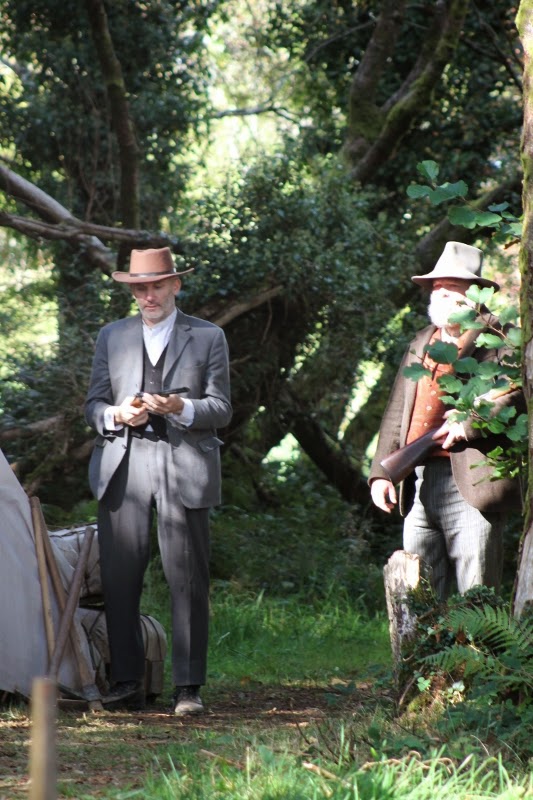 I met the director Dathaí Keane who hails from Tiree so we had a nice chat about the pub at Scarnish when I told him I had had cargo on the puffer to the wee pier just outside it. 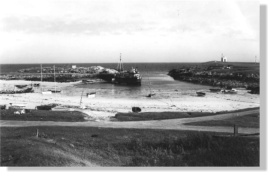 Scarnish bay is very exposed with a nasty wee breaking reef just outside so it was a settled weather job beaching there, gone are those days.