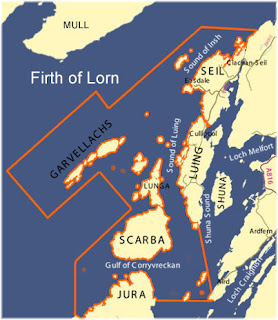 Well its raining this morning so a good chance to blog about where my parents live and I grew up.

The island is only 6 miles long by about a mile wide and has a population of about 200 which has been pretty stable over the last 40 yrs, owned predominately by a farming family called Cadzow the island has two villages that were initially populated by quarriers as the island has fine slate. Early signs of habitation on the Island include two ruined hill forts. The southern most of these still has a flight of steps, and pillared doorways. The island was part of the kingdom of the Lord of the Isles, and passed through the hands of the MacDougals, MacDonalds, MacLeans and Campbells.

My Father fished lobster here as did his and we were talking last night about the Argyll Marine Special Areas of Conservation and the fact that they have stopped various methods of fishing namely dredging in the Firth of Lorne and the area round the island, I was supprised when my Father offered the opinion that if dredging was to be stopped then all fishing should be. The marine area round the island now covers 210 km2 including the gulf of Corryvrechan which when running is the 3rd largest whirlpool in the world. 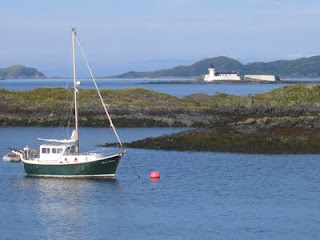