Well Halloween was a good crack, ended up with over 30 guisers dunking for apples and some young blokes that turned up I got them to try dunking for a bottle of becks, of course its impossible to actually get the bottle underwater because of the depth/ space / angle / lack of oxygen but haveing been a young gent myself at one time I knew the extent they would go for for beer and it was hillarious starting them off on their way to hypothermia. The recorded scary sounds went down well too lol.

Its the Melbourne cup tommorow unfortunately its run at 0400 irish time lol. I might tape it and watch it when I get up all 200 riviting seconds. My front yard is like a parkign lot this morning Mark was round and left his car here so the guisers didnt go to his place and scare his cat last night and Angie is away to  England so her car and mine are here too. Had a walk in the pouring rain today which I suppose I should get used to doing.

Ohh I tell you what my pumpkin lamp looks blinkin scary now its partially cooked from the candle inside and has sort of drooped looks like its scowling at you.

Paddy fitted his car with his own airbag, see below 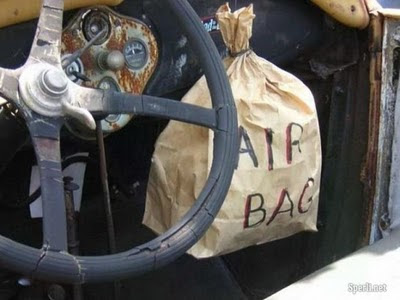