Robert the Shairp and the spider 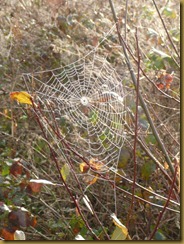 My eye fell on a spider spinning its web. It kept trying to swing across the branch, over and over again, until at last it reached the other side and anchored the first strand of the web. "Try, try, and try again". I’m adopting the same motto and will spend the next eight years swinging between branches. 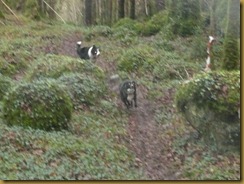 Jessie is fitting in grand the two dogs seem to get on well already and after about three miles through the forest today at breakneck speeds, they are both pegged out. Gus has the edge stamina wise but he is only two years old and has been in training the last month or so. 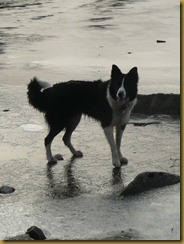 The loch is still iced over but temps were in the mid single digits today. Forecast it for colder weather again later next week. I’m going to have a second look at the trailer yacht if it’s a half decent day tomorrow before the ice and snow set in again. It would be nice to have a white Christmas.

A burglar broke into a house one Christmas Eve looking for presents while the family were out. He shined his torch around, looking, when a voice in the dark said,"Jesus knows you're here." He nearly jumped out of his skin, clicked his torch off, and froze. When he heard nothing more , after a while, he shook his head and continued. Just as he pulled the stereo out so that he could disconnect the wires, clear as a bell he heard, "Jesus is watching you."

Freaked out, he shined his light around frantically, looking for the source of the voice. Finally, in the corner of the room, his flashlight beam came to rest on a parrot. "Did you say that?" he hissed at the parrot.

"Yep", the parrot confessed, then squawked, "I'm just trying to warn you that he is watching you." The burglar relaxed. "Warn me, eh? And who are you?" "Moses." replied the bird. "Moses?" the burglar laughed. "What kind of people would name a bird Moses?" "The kind of people that would name a Rottweiler Jesus......."