Well its still dry and a nice enough day with it, I actually went out and bought a hose today as the plants look dry. No doubt as soon as I water them it will rain. Angie has signed up to do her yachtmasters day skipper ticket and that arrived int he post today, its actually quite in depth coastal navigation by the last sections, I was impressed until I had a thought, "what good is a basic navigator", none at all is the answer, its a case of a little knowledge isnt enough.

The garbage and recycle bin stickers arrived today, over here there are no water/ garbage rates instead you pay a private contractor to take away the rubbish it costs E220 for a yr for a 240lr general waste bin and a large recycling one for paper and tins, they are collected on allternate weeks, in Australia they collected the garbage weekly, in 2 weeks it would have walked itself to the dump in the Summer. 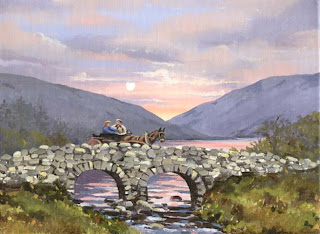 The Quiet Man bridge is situated between Oughterard and Maam Cross on the road to Clifden, Connemara. It was over this bridge that John Wayne and Maureen O'Hara crossed to his ancestral home "White O' Morn" in the 1952 film " The Quiet Man".
Posted by Rob Shairp at 10:16 PM