Ajax midfielder Evander Sno had be to revived by a defibrillator on three occasions after suffering a cardiac arrest during last night’s reserve game at Vitesse Arnhem I can only imagine how he feels this morning as he recovers, Evander is only 28, I was 44 when I had my heart attack, he must be fit, being a proffessional footballer, I wasnt, being a layabout. He passed out and they had to use a defibrulator to resucsitate him I was concious through mine but apart from those differences he has to go through the same recuperation I suppose.

When you are having a heart attack and concious, in my experience, you aren't scared, I was more concerned about how much of an inconvenience I was causing my parents, however when you start the recovery you are concerned about everything, I had to have a defibrulator fitted due to arythmias and had a series of shocks fom it, which affected my mental concerns on a huge scale, but I think anyone that has a life threatening moment, as serious as a heart attack, is affected in the long term. I had to go to a Dr to help me out with my anxiety and I still get moments of irrational thoughts, most of which I blog about. No Rob they arent irrational m8 they are just silly, as is, talking to oneself, especially if you use heaps of commas.

One thing I do know is that we arent here for a long time really, so why not be comfortable and live life to its fullest, I was never one for long time planning anyway.

I see in the news here Taoiseach Brian Cowen has denied giving a live radio interview while drunk or hungover, Bob Hawke has denied ever giving one sober and he had the helm for 3000 days. I mean whats so wrong about talking while innebriated ? wait a min Rob what is that I smell on your breathe is that peppermint over beer? hic

Tonight for dinner I'm cooking chicken breasts baked with parma ham and goats cheese, actually its not Parma ham its air dried ham from the local butcher that has won awards, and potatoe and onion ducks egg fritata. The oven in this house is great 6 gas burners and 2 electric ovens and grills. I had a play with the central heating too and its really controlable , has 3 zones with thermostats a timer and each radiator has also its own control. Run by oil it seems to be good.


Ohh we dont give way here we yeild 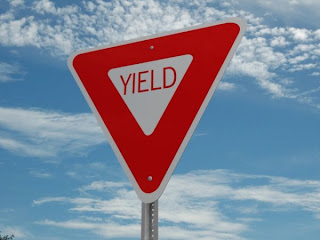 Ohh below is my first attempt at mosaic its meant to be a lorikeet not a multi coloured football btw. 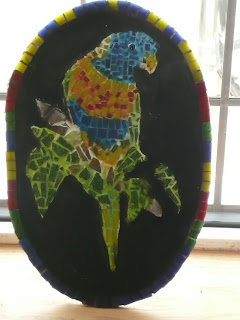