Tea with a neighbour

Well I had tea with Geofrey next door, he has a nice wee cottage his parents renovated and he has been working on since, very small rooms but ultra cosy with 3 ft thick walls and a stomper of a stove that gets it to 26C on next to no fuel. He put me right on the best places to fish, which is his passion and the reason he chooses to live here, which builders not to use and the like. He also told me about a wind farm that had been proposed on the mountainside opposite the houses here that he had thwarted thankfully. It would spoil the magic views. We had a wander round and he showed me the boundry against his garden which actually gives me even more land than I thought lol unfortunately its under brambles. 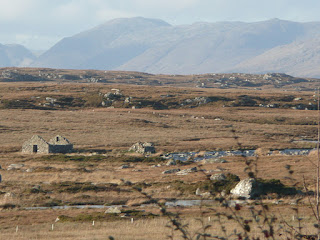 Thankfully there wont be windmills in this view.
Angie took the Ford in for a service today and I have yet to hear how much that will have cost, I think the tyres were getting close to bald so it could be scary, I gave it a good clean out yesterday as it gets used as a dog kennel / taxi most days, poor car.
I see on the news that traffic wardens have been getting rewards for overperforming, for years, Wardens in Westminster have been sent a newsletter by parking contractor NSL offering them points to use in Argos and Homebase in exchange for suggesting new areas to snare drivers. Enforcement officers are also being given the reward for performance "above [the] beat average". Fine them for looking for a legal spot to park, emmmmm fine them for waiting for a spot, emmm fine them for cycling to work, how about a fine if your efforts to get a fine dissmissed are unsucsesful or sucsesful for that matter.
﻿
Posted by Rob Shairp at 5:21 AM