I think it should be called the world cup “beg” not bid. England have a future King, a prime minister and the worlds most famous footballer in their beg, Russia has a picture of a large turnip. Its about an hour and a half till the result and cant you just wait for all the excuses / whinges.

I contacted a kennel for Gussy boy when we are away picking up Jessy I think he will be better off there than Home Alone as I watched the movie.

I got oil delivered today for the heating and it worked out at about 60 euros a week to heat the water and the house over the last 8 weeks, that seems a lot but it is a big house and I haven’t been skimping on heat. Its been really cold here but the Scottish Highlands have had a record low overnight of –25C which is in a different ballpark. Talking about ball parks there were record crowds at the Oughterard football stadium today 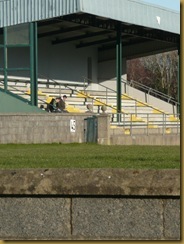 Not sure what they were waiting for but Gus and I invaded the pitch anyway whooping and barking.Its been a while since my last pitch invasion and it felt like a good idea at the time. Oh there were two people in the stand, in case anyone has pics turned off and missed my wee effort at humour, blinkin pathetic I know but I was distracted as there are no postcodes here.

Catching the 8 hr. Irish sea ferry across to Liverpool next Tuesday night I bet it blows a gale lol its been flat calm and icy this last month but first time I step on a boat it will blow I just know it. I think a shovel, thermos, blanket, and warm clothes are on my packing list.