Well we are off to London to see the Queen well not the Queen but a dog called Jessy, shes not even a corgi, I cant remember where "off to London to see the Queen" came from and google isn't much help either. Mind you its still early and I've been up for a couple of hours lol. Gus has to go to the kennel at Adrahan which is about an hours drive from here. There has been snow again in Dublin and central Ireland but I hope by this evening the roads will be ok. 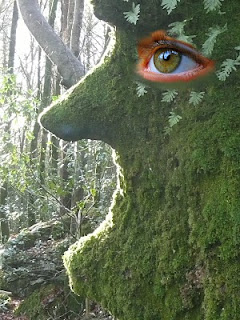 Have you ever been walking through a wood or field and seen a natural landmark or something that resembles a face or animal, this tree reminded me of a face even with the eye closed. 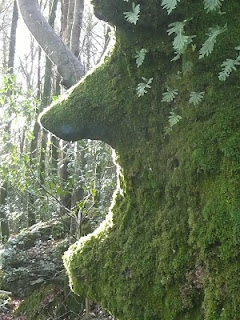 Well today is the budget, forecast to be the worst for poor families in the history of Ireland, you have to feel sorry for the Taoiseach's too, his salary has been somewhat higher than for leaders in many other countries: €228,466 annually following a recent reduction of 20% on the previous €285,582, compared to £142,000 (about €172,164) for the UK's priminister. In October 2007, the Taoiseach was the highest-paid head of government in the OECD countries. He must be the highest paid clown in the world ehh. 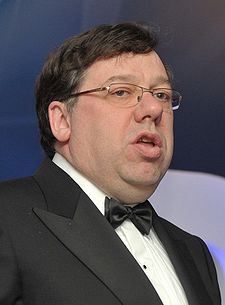 Cowen's personal rating is just eight percent.  An unpopular clown ehh. A red nose might help he should go stand outside for ten mins, its freezing again.
Fekin Mary Byrne is out of the X factor, whats the fekin x factor you say? well its a talent singing contest watched by millions who vote in for their favorite singer. I blame my friends Trish and Archie for putting me onto the thing, its not my scene at all but the shows knockout theme is kind of addictive a bit like Australia's next master chef. Next thing I'll be watching Days of our Lives ohhhh noooooooooooooooooooooooo.
Ohh well better go pack the car see yas all when I get back from the UK.
Posted by Rob Shairp at 8:45 PM