My pal Mark's car had to go to the garage today so I offered to run him across to catch some home less cats he has been feeding during the cold weather, he managed to catch one with my help. (I stayed quietly in the car), and he is going to try and get the second one tommorow, it was a bit younger and looked healthier. The first one is in at the vets tonight getting the snip.

The skies over Britain will turn a dark shade of red tomorrow morning as the moon moves into the Earth's shadow in a rare lunar eclipse.
A total lunar eclipse occurs when the sun, Earth and moon are almost exactly in line, with the moon and sun on opposite sides of our home planet.
The alignment will cause the full moon to appear much dimmer than usual, but sunlight passing through the Earth's atmosphere will give the lunar surface a deep reddish hue at dawn.
The eclipse is due to begin at 5.28am, as the moon enters the lightest part of Earth's shadow, known as the penumbra. In this early phase of the eclipse, the moon will appear yellowish in the pre-dawn sky.
A more significant dimming begins as the moon enters into the darker part of Earth's shadow at 6.32am and becomes completely eclipsed at 7.40am.
Unlike an eclipse of the sun, star gazers do not need protective eye equipment to observe a lunar eclipse.
For the first time in nearly 400 years the lunar eclipse coincides with the winter solstice, the shortest day of the year. In addition, both sun and eclipsed moon will briefly be visible above the horizon – cloud cover permitting – in an unusual event called a selenehelion. 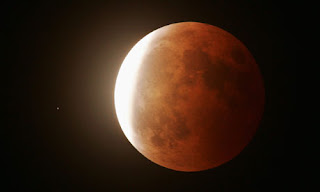 Hey if you see a spaceman tommorow, park in it man. Did you hear about the Irish spaceman? he was an astronut.

Hundreds of passengers are facing a third day stranded at Heathrow airport and long queues have formed at London's Eurostar terminal as the big freeze continues to wreak havoc with Christmas travel plans
Posted by Rob Shairp at 7:07 AM