Well we had a great feed, scallops in a cheese, wine white sauce with garlic asparagus for a starter then the Turkey, ham, roast spuds, celeriac, piggy's in blankets, honey carrots, Brussels sprouts, bread sauce, gravy, stuffing and cranberry sauce then trifle. Ate so much we all stopped drinking which considering the noise and amount consumed the night before was maybe just as well. 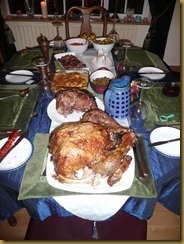 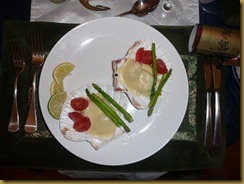 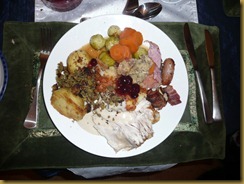 We couldn’t even start on the Christmas pudding or cheeseboard, unfortunately I fed the dogs far too much turkey and rich food and this morning there was a huge accident, the dogs came bounding up the stairs all excited it was too much for Jessies constitution and she made it to the ensuite before kersplat all over the tiles aghhhhhhhhhhhhhhhh first job of the day was cleaning it up.

Cant get much worse than that ehh, wrong there's a blocked pipe in the basement and the toilet waste, well its come up the shower and at the same time Angie had done a washing and the water from that well it flooded the laundry. So after the sewage clean up I only had to mop out the laundry.