new wellies, massive wind chimes and mucking about on the water

Well I got the chance to use my new wellies :) and fine they are too all green and waterproof. Hired a corrib boat and went across to Inchagoill or the island of the stranger, and strange we must have looked too me in my wellies and Angie in my waterproof trousers which were about 10 sizes too big for her. The island is lovely it is home to a number of ancient monastic ruins, some dating back to the 5th Century. In order of size Inchagoill measuring 104 acres is the forth largest island in size. To-day Inchagoill is owned by the state and its national monuments are protected by "Duchas" in the Department of the Environment.


Sir Benjamin Lee Guinness purchased this Island as part of the Ashford Castle estate in 1852. At that time there were four families living on the Island and these families were tenants on this estate. Some family names included O' Sullivan's Kineavy's and Conway's. In older times there were as many as six families living on the Island with other names including Murphy's, Lydons, and Butlers. These families farmed 80 acres of land in the centre of the Island with 50 acres of high trees as shelter all around. By about 1935 there was only one inhabitant on the Island, a man called Thomas Nevin.

Thomas Nevin was employed by the Guinness family as a caretaker on the Island about 1931. In his early years Tommie fought in World War 1 in Guillipi and contracted malaria during his time there. About every 2 weeks Tommie would row a small fishing boat to Cong or Oughterard and sometimes return to the Island in the dark using the lights of Ashford Castle as his compass. Apart from meeting visiting fishermen who used lunch on the Island, Tommie led quiet a lonesome life with only his dog as company. The Guinness family furnished Tommie with a dry battery radio, a very rare commodity at the time which gave Tommie great company during his years on the Island. In 1938 County Galway and County Kerry were to play in the All Ireland football final, and as this was only one of the few radios in the area, at least 100 people gathered in his house on the Island to listen to this National Event. Tommie Nevin was to live on the Island alone up until 1948 in which year he moved in to live in the village of Cong where he died in 1964. I can imagine it was quite a party the 100 listening to the footy. 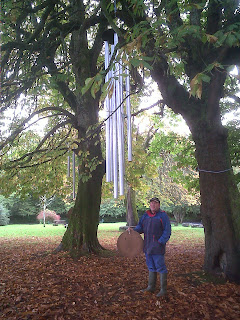 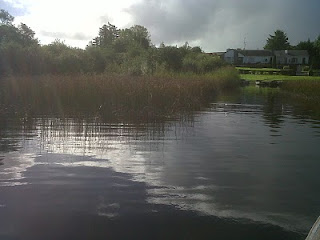 The loch Corrib fishing boats like the one we hired are quite narrow gutted 19ft clinker or clinker effect hulls. Apparently they are this narrow so they drift beam on to the breeze for fishing, there is a 6 knt speed limit on the loch and the 4 stroke honda outboard 8hp was goverened down to only do that speed I recon.
﻿