Well I awoke this morning to sunlight streaming in the window, no I didnt sleep in, sunrise here is at 0520 and  I hadn't closed the blinds properly last night. It was lovely to see the sun after what has been a dreich wet windy old week. Anyway by the time I showered, repaired the hotpress airing cupboard shelves, that the plumber had taken to bits then decided it wasnt his job to replace, put on a washing, filled the bird feeder and had a coffee we are back into rain again lol. It looks like showers right enough and its not half as windy as it was. 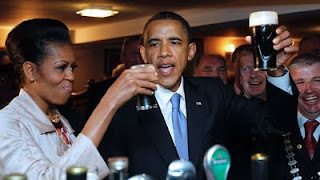 President Obama got in touch with his Irish side and got into the grog yesterday on his visit, was great to see how open and how genuine he seems. He started with a joke, "My name is Barack Obama of the Moneygall Obamas." Monegall is a place in Donegal, ohh Donegal is a place in Ireland btw. He was introduced by the Irish Prime minister "The 44th president is different - because, ladies and gentlemen, he doesn't just speak about the American dream, he is the American dream!" The show that Donegal put on for the guy wont do any harm for tourism either.
Posted by Rob Shairp at 6:38 PM