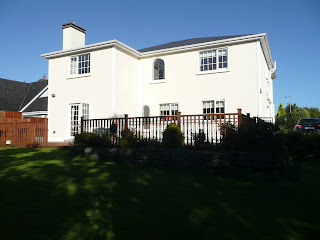 I have the Sky tv repair man here today as my dish is acting up, it looks like he will have to get up on the roof and put a new one up, I dont envy him as this house is huge and its like being up 3 stories and its still windy to cap it off. It was the usual "I'll be there sometime between 8 am and 4 pm" carry on, not that it bothered me today as I didnt have any work on but he also ended up calling me 4 times for directions to the house lol NO POSTCODES strikes again.

I phoned my Mom earlier and they had had the gale that came through here as well, all the leaves in their garden that survived the wind are damaged by salt spray and have turned black, such a shame as my Dad has nice roses usually. The hedge here between ourselves and Eon has made a recovery and is in full bloom after everyone thinking it was dead, I have got a few bushes etc that did die but the rest of the garden is looking well, exceptional actually for a rented garden.

The Sky techy just finished and drove off leaving his rubbish lieing all over the garden and bits of wire throughout the house grrrrrrrrrrrrr I hate that. This guy was an unfriendly sod too, Eastern European I recon and not happy in his job, he should try earning nothing for a wee while. Ohh well will give me something to do tidy up after him.
Posted by Rob Shairp at 11:19 PM