Well this spring has been the driest for between 30 and 40 years, the winter was mega dry too mind you it was down to minus 12C, glad we came back for this year as its been awesome, I have just had shorts on for the last few weeks, well actually I had socks and a shirt on too, gawd forbid the man breasts see the light of day. Unfortunately the dry weather has led to gorse fires > 200 over the UK and Ireland.
Thousands of firefighters were last night desperately battling against large infernos that have forced people from their homes in districts across several counties in Ireland and I can smell smoke in the air here like I used to in Australia. 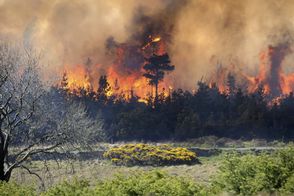 Still on the smoke topic, smokers anxious to sneak a last drag before catching their flight will now have to fork out another £1 coin to get their fix. For just over a week smokers passing through Belfast airport have had to pay to enter a specially-constructed addition to the airport building. So I think smokes are about 45 cents each here so Euro 1.68 per cig phew. My new yacht was paid for by money saved by not smoking this last 5 years.

I've been trying to reduce my Prendisone intake and have been down to 3.5 mg this last two weeks but sheeze I'm sore all over and may have to doze up again :(
Posted by Rob Shairp at 11:08 PM