I love the sound of chainsaws in the morning.

Much better than the smell of napalm in the morning is the sound of chainsaws especially when they are clearing my fallen trees, big thank you to my friends Keith and Micháel for helping me out in my time of need so to speak. The other noise is the builders stripping the first two rows of tiles off my roof so they can get back to some sound timber to work with. Hopefully insurance is going to pay for the roof repairs.

Angie is away to the UK till Friday and today is a nice sunny calm day, 1st one this year and its like a different country when its like this, I am hoping the weather lasts till the roof is fixed, well actually it would be good if it was nice weather for a while but I doubt that will happen.
Temperature records were shattered in states across the US, including Alabama, Georgia, Tennessee, Arkansas, Michigan, Maryland, Ohio, Pennsylvania and New York yesterday. It was -17C (1F) in the small town of Hell, Michigan, prompting online jokes that the weather was so bad even hell had frozen over. I still prefer the cold weather to the incessant wind and rain but minus 17C is pretty dang cold. 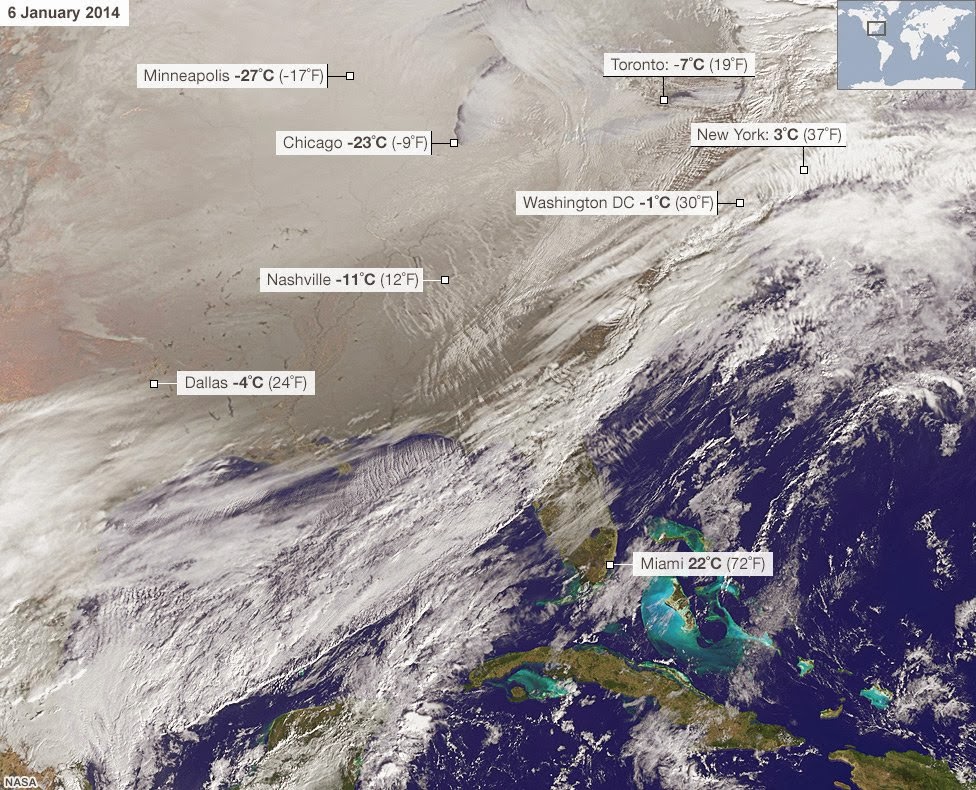 The above picture shows most of America covered by snow and was taken from the US government's GOES-East satellite. It got down to minus 20 C here a couple of years ago and it killed off a lot of bushes that usually survive the winters fine.

I just finished my letter to the Planning department regarding the proposed changes to distances wind turbines should be from residential properties. see below.

It was with dismay that I read, “Concerns of possible health impacts in respect of wind energy infrastructure are not matters which fall within the remit of these guidelines as they are more appropriately dealt with by health professionals”. Surely health and safety is one of the main re...asons there are any Guidelines to begin with, and most of the reasoning and arguments that are being debated and considered by planning committees all over the world are foremostly about noise and its consequent health effects on householders in the proximity of these industrial sites.

I make the following submission in relation to the draft wind energy guidelines:
I would suggest that it would be prudent for Ireland to take on the mantle of the benchmark setter in regard to the distance commercial turbines can be situated to dwellings and legislate for a distance larger than the rest of the EU nations. When people's homes values are being dramatically decreased due to the siting of these commercial wind farms you can expect more and more people to initiate court proceedings, as is happening the world over, with local government and planning authorities as well as developers becoming targets for class actions. In an effort to have the turbines switched off at night or even taken down altogether, Jane and Julian Davis from Deeping St Nicholas in the UK took the developers, landowners and operators of the Deeping St Nicholas turbine array to the High Court in 2010.
The legal case was paid for by NFU Mutual, their insurers, and is one of the first private nuisance cases brought against wind power stations. A settlement was reached before the court heard technical evidence from the Davis family’s expert witnesses. Confidentiality clauses mean that the Davises are unable to report the terms of the settlement. At the moment setback distance is not based on science but rather on geography and a desire to squeeze as many turbines into a space as possible, in order not just to satisfy a 20-20-20 directive but also to generate electricity for sale to the UK. The fact that Denmark sells 70% of its renewably generated electricity to its neighbours at a LOSS seems to have been missed by our country's policy makers.

The UK legislation is also inappropriate for protecting local residents from annoyance and harm caused by aerodynamic modulation of noise from wind turbines, due to their use of the noise descriptor, LA90, 10min. This descriptor is totally unsuited to characterising noise subject to a significant degree of amplitude modulation. In non-technical terms, LA90, 10min is calculated by measuring the noise level over a ten minute period, disregarding the noisiest 90% of the time and taking the maximum noise level in the remaining (quietest) 10% of the time. This may be a reasonable approach if the noise level is fairly constant, but if the noise exhibits significant fluctuations in amplitude then LA90, 10min effectively ignores the peaks and gives an estimate of the noise 'floor level'. I petition you to not allow use of this formula in planning application assessments by developers.

There is mention of guidelines restricting limit of 40dB(A) attributable to one or more wind turbines; my understanding of noise is that its level is expressed in decibels (dB), using a logarithmic scale. A difference of 3 dB is the smallest that can be detected by the human ear, while a noise that is 10 dB louder than another is perceived to be twice as loud, although it is physically 10 times higher in pressure. An increase in noise level of 6 dB or more causes widespread annoyance and disruption. The usual measurement is in dB(A), which emphasizes the range of sounds easily heard (consciously) by humans. A quiet rural night may have an ambient sound level of 20-30 dB(A). Fifteen hundred feet from an industrial wind turbine, the sound level may be 45-70 dB(A), at least four to sixteen times as loud. Another measurement is dB(C), which includes lower frequencies that are not so much heard as felt and have documented adverse medical and psychological effects. Lower-frequency sounds more easily penetrate walls and windows and are a significant component of wind turbine noise. Yet another measurement is dB(G), which includes very-low-frequency infrasound, which recent research shows the inner ear to be sensitive to. If you restrict to 40dB(A) this is allowing a disturbance of between two and four times the usual noise of a quiet rural night which I believe is too loud. Not including dB(C) and dB(G) measurements in the guidelines is also copping out of responsibility.

I own and work from my home in Derrykyle which has uninterrupted views with not another manmade structure in sight as far as the eye can see; the choice to move here and not live in the middle of a city or under a flight path was for the peace and quiet. My home's value is greatly effected by its outlook and location. Gaoi an Iarthar (Enerco Energy Ltd) have proposed to build a wind farm development in Derrynea and Lettermuckoo, North of Casla in Connemara consisting of thirteen huge windmills 135 meters high, buildings, roads and a wind measurement mast; this industrialization of this area will drop the value of my house and land by 25% according to Real Estate Agents quotes. If wind farms were going to do as the developers state and save the World I could perhaps suffer a quarter of my life's savings being written off, but wind farms are not efficient or effective. The whole wind farm industry exists solely down to subsidies, with huge amounts of money being paid out to a few landowners and greedy developers, and this money comes from those of us who cannot afford it in the form of higher and higher electricity bills. The threat imposed on my well being therefore goes to the very fundamentals of why I am submitting my views to the committee.

Please would you acknowledge my submission.

It already has 183 views on facebook and hopefully will get others to submit their views.

You may be able to tell from my blog that I am a bit bored being stuck in the house lol I don't usually waffle on as much.