Beautiful morning and thoughts of my Granny

I awoke this morning to clear skies and calm winds with the sun just about to pop its head over the horizon, its nice to waken up naturally instead of to the sound of Angie's alarm clock, poor soul has to get up at just after six and its still dark this time of year even with the clocks changing. I usually get up with her but if I don't she has a cunning plan to keep me from falling back asleep, she lets the dogs in, one goes mining and the other two sit on my face and jump on my, not unsubstantial belly at the same time.

With the bright sunny calm morning today I was reminded of my Granny who had a saying "It's bright too early" in my early teens, itching to go swimming at high tide in the afternoon I thought it was very pessimistic but she was right more often than not and by the time high water came along it was overcast or worse. I remember one time when I was about 13 or so she asked me to make her a bow and arrow, it turned out the neighbours Tom cat was spray scenting her kitchen window drapes and when she shoed it away it would sit just outside the range of throwing things at it. First shot she had she nailed it, well didn't actually nail it but gave it a clunk to remember. 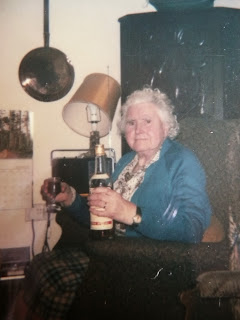 I am not sure what the occasion was that she had a half empty bottle of whiskey, but Slanthe anyway Granny. Maybe it was after the cat nailing.
My Sister in Law, Gail and her hubby George are taking their yacht back down the Queensland coast just now and George has his leg in a cast as he tore his Achilles tendon. She was complaining about head winds they were enduring of 25 knots, it reminded me of the winter before we emigrated to Australia, we had a wee fishing boat called the Dolphin

We sold her to a guy from Bukie on the East coast six months before we left and for that six months over the autumn and winter there was hardly a single day that the winds were less than force 6 and I think there were a dozen days force 9 and above, the poor soul wouldn't have got any fishing in. I hate to tell you Gail but odds are that you will have 25 knots or more for a good portion of your time at sea even on the NSW coast the sea breeze in the afternoons gets that strong, that is unless you moor the boat in the Doldrums somewhere. I wish I was across there to sail the boat back down for them.
Posted by Rob Shairp at 10:11 PM

Hey Robert! Wish you were here too!!!! You know I don't like the strong winds. Yesterday was lovely but today it is forecast again to be 20-25 .. and that's for the next 2-3 days. Much love to you and Angie.