The glass doors in the hall didnt have curtains so as well as being cold the hall was visible from outside so we invested in some and they look great. 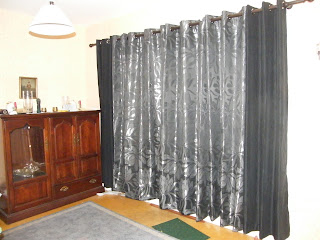 It was a dry sunny day today and cold but that didnt stop the gardening,.
THE world's oldest distillery, Cooley, has been sold to the American bourbon whiskey giant Beam for €73m.Claiming to be the "Worlds Oldest Whiskey Distillery" based on the undisputed fact that a  seven year licence to distil dating from April 20th 1608 is attributed to the distillery. Located near the town of Bushmills in Co. Antrim The distillery has had its "ups and downs" including being destroyed by fire in 1885. It is now currently part of the Irish Distillers Group having been bought in 1972.
Posted by Rob Shairp at 4:58 AM