Cave exposed and a bear returns

Well I was giving the schythe a workout and stepped in a hole up to my waist, was an entrance into a wee cave the back entrance actually as I uncovered a bigger entrance later, the dogs were very interested in the smells in it but I didnt find any bedding or evidence of badgers. I shall do some more schything on Friday as tomorrow looks dreich on the forecast, infact there are more gales on the way tomorrow.

Charity the Bear has reapeared after a respite of a few months, I shall keep hold of her untill January and then she is off on more travels. My aim initially was to have her travel for a year but she has been lost a few times and there arent many photos yet so she will keep going a few months yet before being auctioned on ebay. 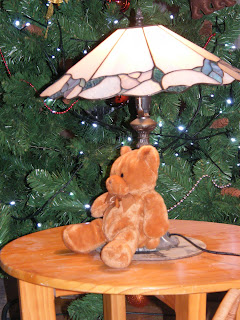