The Oughterard Reggata was on today so we popped along to that, next year I'll take the yacht moor her off the finish line and take a few beers. I had two ducks in the duck race as I didnt go to the Galway races. 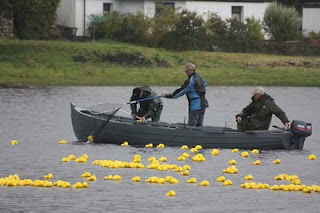 Sacha had a go on the bouncy castle but at 11 you can see he is just on the cusp of being too big, the average age is probably about 7. 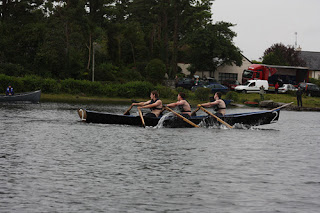 A Currach is a type of Irish boat with a wooden frame, over which animal skins or hides were once stretched, though now canvas is more usual. It is sometimes anglicised as "Curragh". The construction and design of the currach is unique to the west coasts of Ireland and Scotland, with variations in size and shape by region. It is referred to as a naomhóg in counties Cork and Kerry and as a "canoe" in West Clare. It is related to the Welsh coracle, but can in fact include craft far larger than the Welsh vessel. The plank-built rowing boat found on the west coast of Connacht is also called a Currach or curach adhmaid ("wooden currach"), and is built in a style very similar to its canvas-covered relative. A larger version of this is known simply as a bád iomartha (rowing boat).
The Currach has traditionally been both a sea boat and a vessel for inland waters. 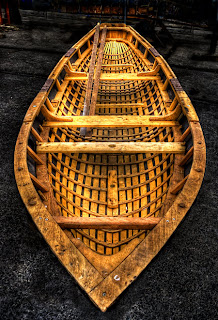