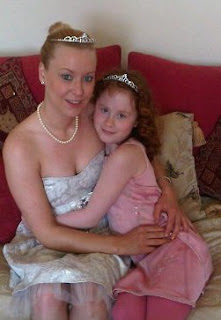 My wee sisters two girls were dressed as princesses for the royal wedding :) I think they look cute. The weather is so nice here today we went sailing instead of watching the ceremony but its been repeated on the news channel a few times and we havent seen any street parties today here to go to so we may have a guiness for them later at home. Its Friday so we will be having out usual Friday night barbeque.

I have a 50 Euro note hidden in my sock as I read about the elderly patient in a Cork city hospital was found to have €60,000 strapped around him. I dont have 60,000 but I know my 50 will dissapear if its spotted.
The man brought the money into the hospital with him in fear that it would be stolen from his home while he was away. Garda and health sources say the man is only one of many who brought large sums of money into hospital with them in the past year. In other cases, tens of thousands of euro have been brought in by patients worried that their houses could be burgled. And others are fearful that relatives will have access to their money in their absence.
Posted by Rob Shairp at 5:31 AM