Well we didnt go sailing, couldnt get the dogs into the kennel as it was full and Angie didnt want to leave them home alone, I was going to go myself but wasnt allowed, I sulked like mad, girned for a wee while about "whats the point in buying a yacht if it sits in the yard" then resigned myself to watching the rugby.

Took the dogs for a walk / swim and Gus got a wash with a wee bottle of shower gell called "heavenly ginger lilly" so he has to be refered to now as "Heavenly Ginger Lilly Gus" makes him feel like he should be in Crufts and he smells wonderful.

Depletion of the ozone layer- the shield that protects life on Earth from harmful levels of ultraviolet rays - has reached an unprecedented level over the Arctic this spring because of the continuing presence of ozone-depleting substances in the atmosphere and a very cold winter in the stratosphere. The stratosphere is the second major layer of the Earth’s atmosphere, just above the troposphere.

The record loss is despite an international agreement which has been very successful in cutting production and consumption of ozone destroying chemicals. Because of the long atmospheric lifetimes of these compounds it will take several decades before their concentrations are back down to pre-1980 levels

The area above the red line will be affected by the harmful rays.

Went up to my pal Keith's mines as he said he had a nice bike ride on his land on the old Clifden to Galway railway line, it was quite hard going riding in the long grass but very pretty. 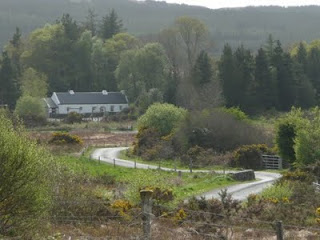 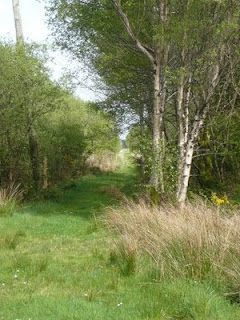 then we drove up to the Maam mountains and hard a wee cycle there too, so between our two rides and the walk with the dogs this morning it was an energertic sort of a day. 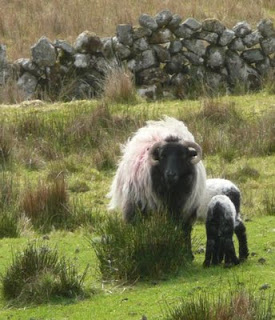 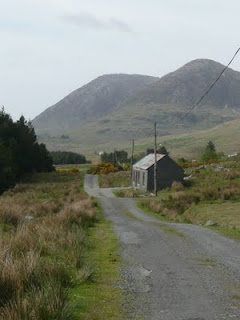 The sound of lambs has to be the most springlike sound there is and cuckoos always make me think of Spring /Summer.

I shall be attempting to Dap in the next few weeks.
While the major trout rivers flow into the Irish Sea on the east coast of Ireland, in the west of the country are to be found the finest brown trout fisheries anywhere in western Europe. Hard fighting, native trout that rise freely to the fly and are excellent sport. Many Irish anglers follow the Mayfly hatch as it spreads northwards along the river and lough systems on Ireland's west coast. Starting in early April, the Mayfly hatch can last into mid June. At its height, when the loughs are dimpled with rising trout, gorging themselves on the spent, adult flies, it is referred to as the "Duffers Fortnight." A period of about two weeks when, seemingly, every cast of the mayfly imitation produces a reaction from a feeding trout.

A popular and a productive way of filling the creel during this period is by "dapping" for trout. Using extremely long fly rods and floss silk attached to the mono-filament backing on the fly reel, the imitation fly is blown by the breeze, with the angler gently dapping it onto the ripple, thus imitating the the natural fly carried on the breeze. The take, when it comes is firm and the temptation is to tighten immediately. Striking too fast when dapping invariably means loosing the fish. Experience suggests otherwise. The old Irish dappers, or so the story is told in the pub afterwards, lit their pipes before striking a fish!
Posted by Rob Shairp at 4:43 AM