Well the sun has got his hat on hip hip hip hurray, I didnt have much on today so took a wee drive 25 miles down to Rossaveal to inspect a potential launching spot for the boat, found a wee place at Ballintleva that would do at high water. One of Angies workmates lives at Rossaveal which is close and we could leave the trailer and car at his place. The Arran Isles are just a short hop from here and the coastline is a stunner although very rocky. 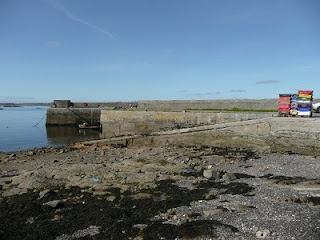 There were ruined buildings at the top of the wharf that turn out to have been coast gaurd buildings and then occupied by the Black and Tans who were employed by the Royal Irish Constabulary as Temporary Constables from 1920 to 1921 to suppress revolution in Ireland. Although it was established to target the Irish Republican Army, it became notorious through its numerous attacks on the Irish civilian population. Thats expalins the small windows for shooting out of.
I made a couple of new pals 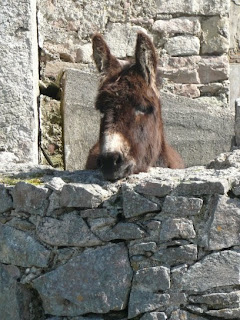 This one is thinking of getting into politics and should do well.


﻿Its a bonny afternoon and I have high hopes for a good week next week.
Posted by Rob Shairp at 2:11 AM