Roughing it and the glorious 12th 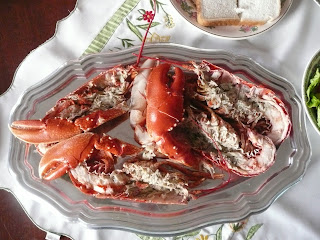 Well we are really roughing it here only managed Lobster for lunch yesterday, whats the world coming too ehh? :) My Mother, bless her cotton socks, starts hording food for my visit months previous so the freezer is full of goodies I asked her one time if she prefered my to tell her I was coming home or to supprise her and she much prefers knowing in advance so she can hoard.
Its the Glorious 12th we should be out shooting something Grouse moors in Scotland and northern England report a surge in bird numbers this year after several very poor seasons due to outbreaks of disease-carrying parasites and unsuitable weather. 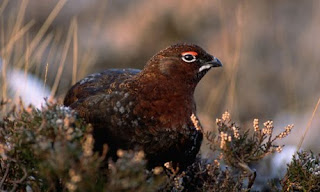 The last few years, grouse bags have been hit hard by infestations of disease-carrying ticks and the parasitic worm Trichostrongylus tenuis, which can decimate grouse populations. The industry is facing intense pressure from ministers, police and conservationists to crack down on illegal persecution of birds of prey, which are unlawfully poisoned and shot by gamekeepers who blame them for killing grouse.
A fresh crisis has emerged this year with a major outbreak of heather beetle, which kill off the young heather shoots that provide 80% of a grouse chick's food, and their characteristic purple or deep pink blossom. Many shooting moors report large-scale loss of heather, and reduced grouse numbers.
Serious heather beetle outbreaks used to occur every decade, but according to the Game and Wildlife Conservation Trust, they are now happening every five years, suggesting a wetter and warmer climate may be to blame.

A guy decided it was time to introduce his blonde girlfriend to the great outdoors, so he takes her hunting for the weekend.They were pretty deep into the woods when he began to have horrible pains in his chest! The blonde began to panic ... "Are you alright? Are you alright?" But suddenly, the guy finally grabs his chest and falls over. Just before his eyes close he manages to mumble, "Call 911"The blonde frantically grabbed the phone and dials the 911 operator. "You've got to help me," she screamed into the phone, "My boyfriend has had a terrible heart attack and he's not breathing! I'm here in the woods all alone and I think he's dead!"The 911 operator goes, "Okay, you've got to calm down. I'm going to tell you everything you need to do.""But I think he's dead!" she continued to scream."Okay ... before I can tell you what to do you need to calm down. Can you lay the phone down and make sure he's dead, then come back to the phone?"The blonde screams into the phone, "Okay okay! Hold on ..."There was silence on the line for a moment and then the 911 operator hears a loud "KABLAM!"The blonde comes back on the line and says, "Okay, he's dead. What now?"