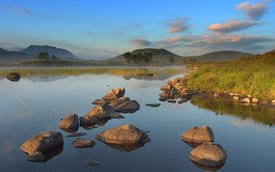 Well we travelled back up to Inverness today via Crianlarach due to a delay on the Fort William road, hopefully it wasnt another fatal accident we had to wait for 3 hours on the way down to Luing as a motor cyclist had died on the A82 at Glen Cloy we ended up missing the last ferry and getting a lift across in a tinny. The route via Crianlarich and Glen Coe was a nice run but took twice the time.

The Massacre of Glencoe occured in the early morning of 13 February 1692, during the era of the "Glorious Revolution" and Jacobitism. In Gaelic, the event is named 'Mort Ghlinne Comhann' (murder of Glen Coe). The massacre began simultaneously in three settlements along the glen—Invercoe, Inverrigan, and Achnacon—although the killing took place all over the glen as fleeing MacDonalds were pursued. Thirty-eight MacDonalds from the Clan MacDonald of Glencoe were killed by the guests who had accepted their hospitality, on the grounds that the MacDonalds had not been prompt in pledging allegiance to the new monarchs, Mary and William II. Another forty women and children died of exposure after their homes were burned.

We also traveled over the moor of Rannoch which is a large expanse of around 50 square miles (130 km²) of boggy moorland. Rannoch Moor is designated a National Heritage site.
It is notable for its wildlife, particularly famous for the sole British location for the Rannoch-rush, named after the moor. It was also frequently visited by Horace Donisthorpe (what a great name ehh), who collected many unusual species of ants on the moor and surrounding hilly ground. Today it is still one of the few remaining habitats for the "narrow-headed ant".
Peat deposits pose major difficulties to builders of roads and railways. When the West Highland Line was built across Rannoch Moor, its builders had to float the tracks on a mattress of tree roots, brushwood and thousands of tons of earth and ashes.

One of the villages we passed through is called Fortingall. The venerable yew tree in Fortingall churchyard has been dated to anything up to 5000 years old. The circumference was noted in 1769 as being 52 feet. Its a really picturesque village that doesnt look atall Scottish with its thatched cottages 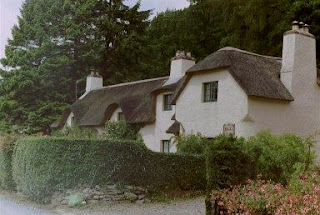 There is a tradition which ascribes Fortingall as the birthplace of Pontius Pilate, the son of an Augustan ambassador and a local woman. This ancient tradition also claims that Pontius Pilate was related to the Scots King, Metallanus, whose royal seat was located on a hill fort called Dun Geal (the White Fort) at Fortingall.
Posted by Rob Shairp at 2:04 AM