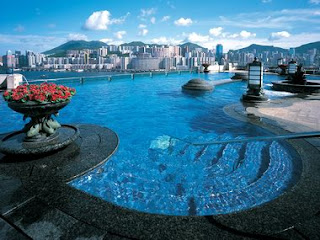 No I didnt get lucky I meant first leg of the journey over. The flight wasnt too bad although 9 hrs feels like 19, its mega hot here and sticky. The hotel is lovely so seems to have been a good choice.
My neck / shoulders have a cramp in them something awful which I think came from excersising Jessie on the bike, I noticed I strained it the other day and sitting on the plane probably agravated things.
The name Coca-Cola in China was first rendered as Ke-kou-ke-la. Unfortunately, the Coke company did not discover until after thousands of signs had been printed that the phrase means "bite the wax tadpole" or "female horse stuffed with wax" depending on the dialect. Coke then researched 40,000 Chinese characters and found a close phonetic equivalent, "ko-kou-ko-le," which can be loosely translated as "happiness in the mouth."
In Taiwan, the translation of the Pepsi slogan "Come alive with the Pepsi Generation" came out as "Pepsi will bring your ancestors back from the dead."
Also in Chinese, the Kentucky Fried Chicken slogan "finger-lickin' good" came out as "eat your fingers off."
When General Motors introduced the Chevy Nova in South America, it was apparently unaware that "no va" means "it won't go"
An American t-shirt maker in Miami printed shirts for the Spanish market which promoted the Pope's visit. Instead of the desired "I Saw the Pope" in Spanish, the shirts proclaimed "I Saw the Potato."
Posted by Rob Shairp at 11:41 PM