Attacked by a killer cat 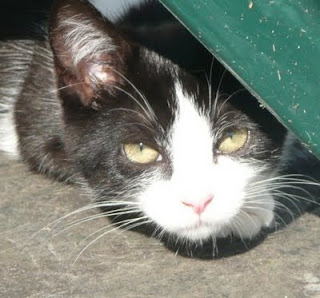 I have suffered bites and have been mauled by a guard cat on the isle of Luing. Dealanach (Lightning in Gaelic) so called as she attacks at lightning speed is apparently "only playing "when she attacks, according to my Mom anyway :)
Its a top day here, sunny and warm, we had a visit to Oban and lunched out at a seafood place that used to be the seamans mission in the town. Its half six in the evening and the sun is still high in the sky, I'll get a sunset probably by half ten this evening.
My folks have the best view from their house which looks out over to the isles of the sea and Mull, About 542 St. Brendan the Navigator founded a monastery on Eilach, Holy Isle, one of the isles of the sea , possibly because of the combination of its isolation and good grazing. This may make the remains the oldest extant church buildings in Britain, although the earliest written record of its existence dates from the late 9th century.The monastery was destroyed by - or, at least, may have become excessively vulnerable to Viking raiders, from about 800 The island has probably seen only intermittent occupation since, which has contributed to the survival of the ruins of many of the monastic buildings, including two chapels, beehive cells, and a graveyard with three crosses and another circular grave. The cells are contained in a pentagonal enclosure overlooking the rocky landing place on the south, which is guarded by various skerries, The oldest chapel is rectangular and may date from the 11th or 12th centuries.
Posted by Rob Shairp at 3:23 AM