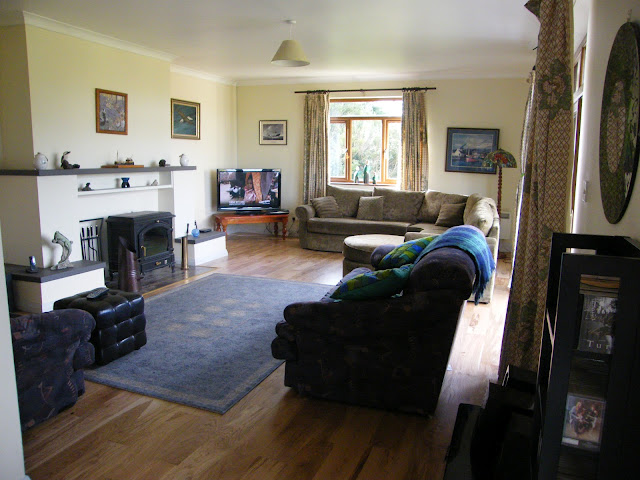 Well the floors are down and I spent today moving furniture and rearanging the house. Its great to have floor coverings back and it looks really good. I still have a bit of painting to do and insulation to go in the loft which would be nice to do before the cold weather, I have a fire on tonight so it is really cosy.

Angie's company did a double take when she said she wasnt going to Dubai and decided to keep her on in the same position here in Galway so thats a bit of relief.

There is a planning proposal for a wind farm development of 14 windmills between me and the 12 pins mountains basically right in my view so I was at a meeting the other night of locals opposing the farm. I'm a "blow in" and the whole meeting was in Irish so I would have been more constructive if I had gone to a meeting of North Korean butterfly conservationists, but I did email the action committee with my points of view today.
The developers had a display in the local hall with photos of how the windmills would look and of course they are in 50 mm wideangle so they look tiny, I showed a comparison that I found online with windmill photos of the same area taken with 50mm and 75mm which is more like what we actually see as a comparison and suggested they ask the developers for shots in 75mm and when they refuse, as they will, we can quote their unwillingness. The Scottish Heritage have a court case just now insisting that windfarm developers show true representative photos in 75mm rather than wideangle shots as they are deceptive.

I went to the movies aand had dinner out last night as Angie was at a going away party for some of her workmates that have been made redundant, the movie was the Sweeny with Ray Winston and was full on violence and swearing and the movie theatre had a grand total of 5 people in it. Last night was the 27th and "Arthurs Day" so the town was full of drunks staggering all over the place when we drove home about 2300.

I did a website for Warmer Homes Ireland and have started one for the Internal Defibrillator Accosiation of Scotland this week and fixed up a PC so it wasnt a wasted week. The weather hasnt been great but whats new ehh and the time that it was calm the bliddy midges were back.

I'll give them "blow in " got as much right as anyone to complain about wind farms here.