Well last April was the best month of the year, the weather was terrific and we went and stayed away on the boat and everything, this Month so far has been great too, reminds me why I chose this part of Ireland to live in when its like this. I have my fingers crossed we will have a good Spring / Summer this year, I want to take the yacht across to the Aran Islands and stay over at some point. 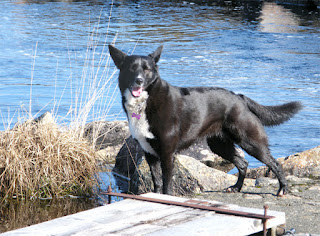 The dogs will have to go to the kennel which they dont seem to mind for short spells. The Aran Islands Oileáin Árann are a group of three islands located at the mouth of Galway Bay.From west to east they are: Inishmore  Árainn Mhór/Inis, the largest; Inishmaan  Inis Meáin/Inis Meadhóin, the second-largest; and Inisheer Inis Thiar/Inis Oírr/Inis Oirthi, the smallest. Irish is the main spoken language on all three islands, and is the language used naming the islands and their villages and townlands much as it is on the mainland here. The islands' geology is mainly limestone and is thus closely related to The Burren in Co. Clare (to the east), not the granites of Connemara to the north. This is most obvious in the construction of the walls around the fields. Inishmore has a good harbour sheltered from the SW and West. The wee boat that was left here at the pond will do me for fishing out of as well, I'll need a hand lift it up to the trailer before May as the Mayfly season on Loch Corrib requires my attention this year.
Posted by Rob Shairp at 4:23 AM