Well who would have thought

World Atheist Convention in Dublin is sold out, who would have thought ehh. They probably sold a few more tickets due to the pedophile priests that were outed this last while in the predominant Catholic church here. I launched Itsa ma Bota earlier and we were going to head out to one of the islands for a barbi this evening but Angie was late getting back as she was rescuing a couple of horses that had been abandoned and Mark wasn't feeling well. The wind had come up a bit too and would have meant punching into it. Anyway shall go for a sail tommorow. 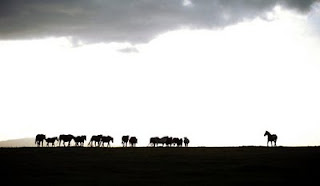 In this country of lush green landscapes, celebrated for its traditional love of horses and the generations of racing thoroughbreds it has bred to conquer the racetracks of the world is a place that wounds the heart. Atop a muddy dome stretching over hundreds of windblown acres, roam some of the tens of thousands of horses and ponies that have been abandoned amid Irelands financial nightmare. Only miles from the heart of Dublin, the tip, a former landfill now covered with a thin thatch of grass, is the end of the road for all but the hardiest animals, a place where death awaits from exposure, starvation, untended sickness and injury.  The number of abandoned horses in this country could be as high as 100,000.  The Celtic Tiger has a lot to answer for.

Thank God they sold out.