trout and a clever cow

Well I had grilled sea trout tonight and made a crust for it with Alpen, mayo and Parmesan cheese, served it with mashed potato broccoli peas and a white sauce with parsley was tasty. I'm always experimenting with food hence my tummy but I'm on a diet this weather so maybe that's why it tasted so good tonight. 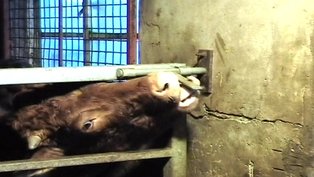 An extraordinary cow has been exposed as the culprit behind repeated escapes from a farm in south Armagh.
Following the installation of camera in the cow shed, it was revealed that the clever cow had worked out the sequence in which to open the bars of the pen to free her fellow cattle. They are thinking of giving her a seat in the Dail (Parlament).

Eggs have been thrown at Bank of Ireland's Chairman Pat Molloy and CEO Richie Boucher at the Annual General Meeting unfortunately they missed.
They were thrown by shareholder Gary Keogh from Blackrock, Co Dublin. Mr Keogh, who also threw eggs at AIB's AGM in 2009, was escorted from the meeting by security. Speaking afterwards, he said throwing the eggs had helped 'bring his blood pressure down'.
Posted by Rob Shairp at 3:55 AM