Wimbledon is six days underway and the temperature is rising, its meant to be 33 C in London tommorow I dont know how they manage to play in that heat. Anyway here are some Wimbledon facts The inaugural tournament of 1877, held at Worple Road, was an amateur competition and the only event held was the gentlemen's singles. The first champion was Spencer Gore from a field consisting of only 22 players. It cost just one shilling to watch the final and Gore received 12 guineas for his triumph. (21 shillings is 1 guinea 20 shillings is one pound) As an example, assume an up and coming professional living around 1890. He might earn a salary of approximately £700 / year. His expenses, which would include: rent (up to £150 annual), taxes, maids (2), food, laundry, heating (coal), electricity, alcohol, insurance, clothing, and savings would add up to close to £500. This would leave approximately £200 for other expenses (transportation, entertainment, education,etc.). Todays salary might be  £50,000 but the prize for winning mens singles is 1,100,000 I guess its slightly better to win nowadays ehh.
In 1930, Brame Hillyard became the first man to play wearing shorts. That was on court 10 - and Bunny Austin was the first to do so on Centre Court three years later. Change was slow to come to fashion in women’s tennis. While men continued to labour away in full-length trousers, women attempted to make the game easier for themselves by divesting themselves of hats, and bustles (the stiff corset like garments attached to the back of their dresses). A small revolution took place when female players started using men's shirts, even daring to roll back the sleeves to cope with the heat. 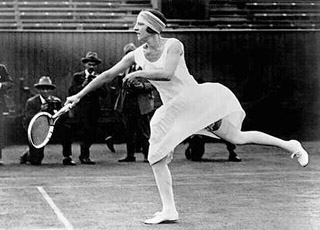 I must admit that the frilly knickers or baggy shorts they wore when I was a kid were a big attraction to watching the tennis.In 1968, the championships were opened up to both professionals and amateurs for the first time, with Rod Laver and Billie Jean King winning their respective singles titles.
Chairs were provided for the first time for players to rest when changing ends in 1975.
The first-ever player to be disqualified from the men's doubles was Tim Henman in 1995, for hitting a ball in anger which struck a ball girl.
Only eight left-handed players, six men and two women, have ever won a Wimbledon singles title - the most recent being Goran Ivanisevic in 2001
The country that has provided the most singles title winners is the United States (with 33 men's titles and 50 women's titles). Britain is second claiming 32 men's titles and 29 ladies titles.