Well I had a customer called Jess in the office with her wee dog Dresden or summat, and Jessy was in meeting with Dresden, sniffing bums etc and another customer came in, shes called Michelle and thankfully Dresden wasnt called Michelle cos I told Jessy to "go out the back" and the first customer started to leave and it was all sooooooooo confusing. I put it down to my drugs, 15 mins and I can partake again.

I had a few jobs that I have done in the office since i got back but its hard to concentrate.

Japanese car Tokai Challenger has crossed the ceremonial finish line in the World Solar Challenge, the race across Australia for cars powered by the sun.

The Tokai University car won the 3,021 kilometre race from Darwin to Adelaide on Wednesday afternoon, and completed the run into the city centre on Thursday morning.
It averaged just over 100km/h for the journey, just short of the race record. 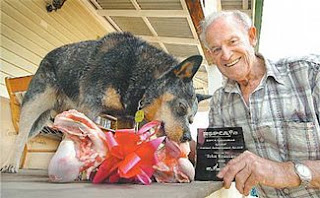 A central Queensland dog which jumped up and down on its owner's chest after the man suffered a massive heart attack may have saved his life.

Teka the three-year-old Australian cattle dog has been given the RSPCA's animal achievement award following the 2007 feat at a glass factory near Bundaberg.
Owner Jim Touzeau's heart stopped and he collapsed unconscious on the factory floor when Teka climbed onto his chest and began to jump repeatedly with all four paws.
The dog also barked in his face, rousing him enough to raise the alarm with his son. So perhaps those of you who are considering sending Fido to the dog whisperer may now rather foster and improve on the jumping up / yapping thing.
Posted by Rob Shairp at 4:00 PM