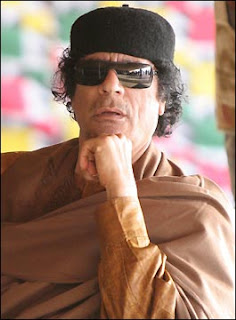 Libyan leader Moammar Gaddafi did not cease to amaze as he gave his first ever address to the UN, taking the opportunity to slam the global body for being ineffective. His colorful speech, which was supposed to last 15 minutes, went on for an hour and 36 minutes,
At one point, Gaddafi grabbed hold of the UN charter and threw it over his shoulder.
After struggling to turn Khadafy’s insane ramblings at the UN into English for 75 minutes, the Libyan dictator’s personal interpreter got lost in translation.
"I just can’t take it any more," Khadafy’s interpreter shouted into the live microphone – in Arabic.
At that point, the U.N.’s Arabic section chief, Rasha Ajalyaqeen, took over and translated the final 20 minutes of the speech.
Gadhafi was dressed in flowing brown robe, and a black beret that he patted at times. As he listened to speeches before he took the stage, aides huddled around him; he kept his glasses, a red handkerchief and a rumpled yellow folder in front of him on the desk. The black beret patting thing probably reminded him of spanking of which he must have had a lot as a kid. That was in reference to yesterdays blog observation about spanked kids IQ's.

John Cleese and Greg Norman are getting divorced, not from each other, from their respective wives, John will have to fork out £8 million in cash and assets.
Ms Eichelberger, an American psychotherapist, will also receive £600,000 a year for seven years. Greg Norman was married to Chris Evert for 15 months so I'm not sure what thats worth. Give me golf clubs, fresh air and a beautiful partner, and you can keep the clubs and the fresh air Golf is a good way to ruin a nice walk.
Posted by Rob Shairp at 2:44 PM