Well what a weird morning light to wake up to it was like a strange red fog. The spectacular dust storm that swept through most of eastern Australia may have had its origins 12 months ago, an Australian expert says.
And with climate change set to bring more variability, Australia may experience more large scale dust storms in the future.
This week's storm covered a large area of eastern Australia, with PM10 (particles less than 10 micrometres) levels in most Australian cities being well above safe levels.I had all the windows in the house open and everything is covered in dust.Severe weather forecaster Dr Deryn Griffiths of the Bureau of Meteorology says the dust storm started two days ago when 100 kilometre per hour winds whipped up dust from the central region of Australia.

"It started in South Australia and has since extended across all of New South Wales and into Queensland."
She says extremely dry conditions throughout the interior of the country, along with strong winds, provided the perfect recipe for the dust storm.
"The township of Moomba in South Australia has had only 11 millimetres [of rain] this year - it's very, very dry," she said.Dr Griffiths says the dust storm is the biggest to hit the city of Sydney since the 1940s. 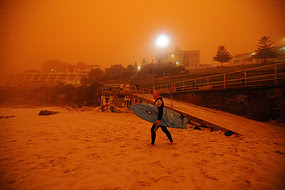 You re hiking around on Hampsted Heath (a park near London) at the end of a long sunny day. You run across (separately) the ghosts of Sir Winston Churchill, Sir Baden Powell, and Sir Edmund Hillary, who all give you directions to the nearest tube stop. Whom don’t you believe? Your story teller, for there is no such thing as a completely sunny day in England.
Posted by Rob Shairp at 7:04 PM