I got back to Derrykyle at just before 2300 Friday night, the drive down started at 0730 when I caught my first ferry across to the mainland with a calm morning and temps of 1C. There was a smattering of snow beside the roads all the way down to Loch Lomond and the temp went down to 0C coming over the "Rest and be Thankful" but the roads were clear and I made good time. I made that good time I was a couple of hours early for the next ferry from Cairnryan to Belfast so I went for some lunch in Stranrae. I was a bit concerned that the ferry across the Irish sea would be rough after the storms the day before but it was as flat as a tack, the temp had also risen to 11C. The ferry got into Belfast at 1745 and the traffic was slow and hectic until I got out of the city.  This time of year it is dark by 1600 so all the Irish part of my journey was in the dark and a fair bit of it in drizzle but it was no worries and the motorway coming this way on the second half of the drive is easier than going North when the roads are getting smaller and smaller.

I spent yesterday putting up the Christmas tree, unpacking the car, putting a unit on the bathroom wall and various other bits and bobs. My Mom gave me a carload of things they do not have space for like an antique sewing box and a semicircular table (which was originally from Angie's Mom) so they are now in the living room. 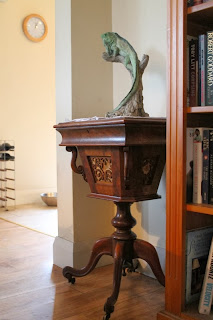 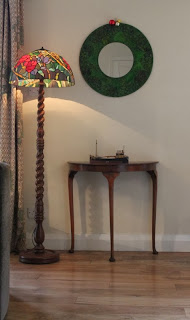 Dad contributed some darrows for fishing mackerel next summer and an old horseshoe which is mounted on my shed door collecting good luck. I also got some glasses and wooden candlesticks and a whole kilt setup with both day and formal jackets and sporrans etc which I will make good use of. The tartan is Cameron of Erracht which was my Grannies tartan and I love it. 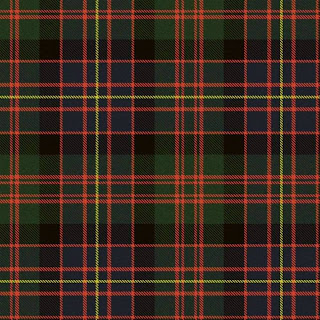 The Cameron of Erracht Modern tartan is predominantly green, black, red and yellow. Ewen Cameron of Lochiel took as his second wife Marjory MacKintosh. Their son Ewen was the first of what would become the Camerons of Erracht. This was in the early 16th century and by 1745, Donald Cameron, 7th of Erracht, was second in command of the Camerons at Glenfinnan when Prince Charles raised his standard.
Posted by Rob Shairp at 11:28 PM