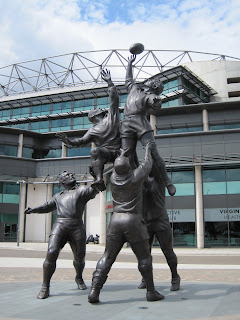 The rugby players are at Twickenham Rugby ground and the stitched photo I did above is part of the view from Henrys mound in Richmond Park its a 955 hectares urban park within London. Almost three times as large as New York City's Central Park, it is Britain's largest urban walled park, and the largest of the Royal Parks in London. It is close to Richmond, Ham, Kingston upon Thames, Wimbledon, Roehampton and East Sheen. The park is famous for its red and fallow deer, which number over six hundred and are very tame.During King Edward's (1272–1307) reign the area was known as the Manor of Sheen. The name was changed to Richmond during Henry VII's reign. In 1625 Charles I brought his court to Richmond Palace to escape the plague in London and turned it into a park for red and fallow deer. His decision, in 1637, to enclose the land was not popular with the local residents, but he did allow pedestrians the right of way. To this day the walls remain, although they have been partially rebuilt and reinforced, and Richmond remains the smallest National Park in the UK.  We had lunch there today.
Tomorrow I head for bonny Scotland and the wild and wooly west.
Posted by Rob Shairp at 2:47 AM