The harbour was busy today I guess their quotas must be full as the sea state is low and they could quite easily be out filling their holds with the silver darlings or sand eels as the case me be. Its really surprising the lack of a pub or shop close to the wharf. Considering how many people visit the Aran islands and the fact that the ferry leaves from here too you would think somewhere selling Guinness and seafood would make a squillion.

Angie finished a jigsaw of Turners  Fighting Temeraire which turned out nice, The Fighting Temeraire tugged to her last berth to be broken up is an oil painting executed in 1839 by the English artist J. M. W. Turner. It depicts one of the last second-rate ships of the linewhich played a distinguished role in the Battle of Trafalgar in 1805, the 98-gun ship HMS Temeraire, being towed by a paddle-wheel steam tug towards its final berth in Rotherhithe south east London in 1838 to be broken up for scrap. The painting hangs in the National Gallery, London, having been bequeathed to the nation by the artist in 1851. In 2005 it was voted the nation's favourite painting in a poll organized by BBC Radio 4's Today program. 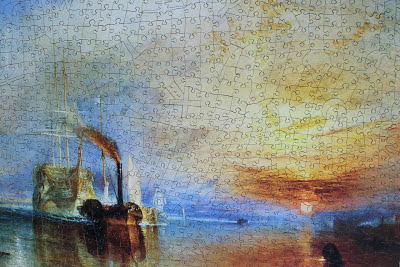 The jigsaw is wooden and has wee animals and objects hidden in the jigsaw like a teapot and a dodo in this one, they are really nice jigsaws and this one will probably be framed and join some of the others she has done on the wall. The are made by a company called Wentworth they are expensive but if you have them on the wall as a piece of Art they are worth it.

I moved my blog on Search Engine Optimization for websites to Blogger too its at http://galwaysitedesign.blogspot.ie/  and since a lot of the garden photos were lost I put them on Picassa so you can view them again by clicking on that link.