Visit to the Cardio Department

Well I had to go for an echocardiogram this morning then be poked by a 25 yr old Polish Sheila who said she was a Dr, I didn't complain even when she wanted to feel how rough my hands were on the back of her kneck, ok I was dreaming again. I have been put on a bigger dose of Atacand and fish oil which used to be subsidised but was removed last month, so its costs about as much as caviar, probably because they knew I was coming and fish oil comes from Poland. Have to go back in 3 months to see how the drugs have gone and maybe have an angiogram which is where they pump dye into your blood and watch it circulate through the heart, if they use blue dye it may not show, I told the Polish Sheila that, but she was too busy playing angry birds on her iphone, or summat, to hear, or didnt quite get the joke.

Ben hasn't been claimed so we had a bath, I say we although he was quite good and stood in the bath well, after he realised I wasnt going to skin him so I didnt get too wet. He is less brown in colour than we thought initially. 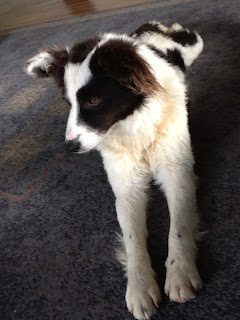 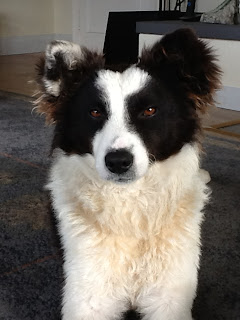 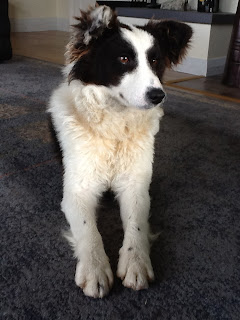 He follows me round like a shadow so I guess he is glad to be in a warm environment with dogs and dog lovers.
Posted by Rob Shairp at 12:43 AM

Seems like it went well then? Hope so. Love that new dog of yours. Maybe you can find me one too? Ideally, I'm looking for a labrador crossed with a sheepdog but ya know, ideal world.
Just in case word goes out in the wandering and lost dog world ;-)
I do love reading your blog but I do it on googlereader and often race off to do other things because I was just sneaking a few minutes off
Love to all