My wee cold turns out to be Bronchitis, so on Drs orders I can't do any housecalls which is a bit of a drag. The weather is lovely, today is 28C and sunny and the whole week was similar.


Europe's best known landmarks — including the Eiffel Tower, Big Ben and Rome's Colosseum — fell dark Saturday, following Sydney's Opera House and Beijing's Forbidden City in joining a global climate change protest, as lights were switched off across the world to mark the Earth Hour event. Millions were expected to turn off lights and appliances for an hour from 8:30 p.m. in a gesture to highlight environmental concerns and to call for a binding pact to cut greenhouse gas emissions. This year's was the fourth annual Earth Hour, organized by the World Wildlife Fund. I missed it but was asleep with only the tv on so I suppose I may have done my part.
Australian scientists say they have discovered the first evidence that an ancestor of the mighty Tyrannosaurus rex once roamed across Australia, they havent named it yet but I think the Tony Abbot would be a good name. 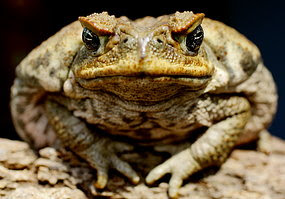 Tourism Australia has defended its decision to put a live caged kangaroo on display on the streets of Los Angeles, saying the animal was well cared for. The kangaroo sways constantly, appearing distressed, and a number of animal welfare groups have already condemned its treatment. I wonder who thought having a Roo in a cage in LA was a good idea, it may have been the same person that suggested the cane toad would be a great speices to introduce into Australia. It is hoped that more than one tonne of cane toads will be collected across north Queensland this weekend.It is part of the annual environmental campaign called 'Toad Day Out'. Collection tents and weigh-in centres are being set up across the north.The day involves the humane collection and disposal of cane toads, which are booming in numbers and causing extensive damage to native habitats.
Posted by Rob Shairp at 1:09 PM